Apart from the usual sight-seeing and shopping.

Changing a travel routine really adds some depth into your travels. You get to experience (as much as possible) what a local culture is like. Like Japanese football culture.

Well this is not really for me, but for J. It so happen that on one of the travel dates we were there, the local football J-League was on. The teams playing were F.C. Tokyo vs Sagan Tosu at the Ajinomoto Stadium (味の素スタジアム), Chōfu, Tokyo, Japan. To add to the bonus, we got to see Fernando Torres! I really didn’t know what to expect, so this was a really cool experience for me. 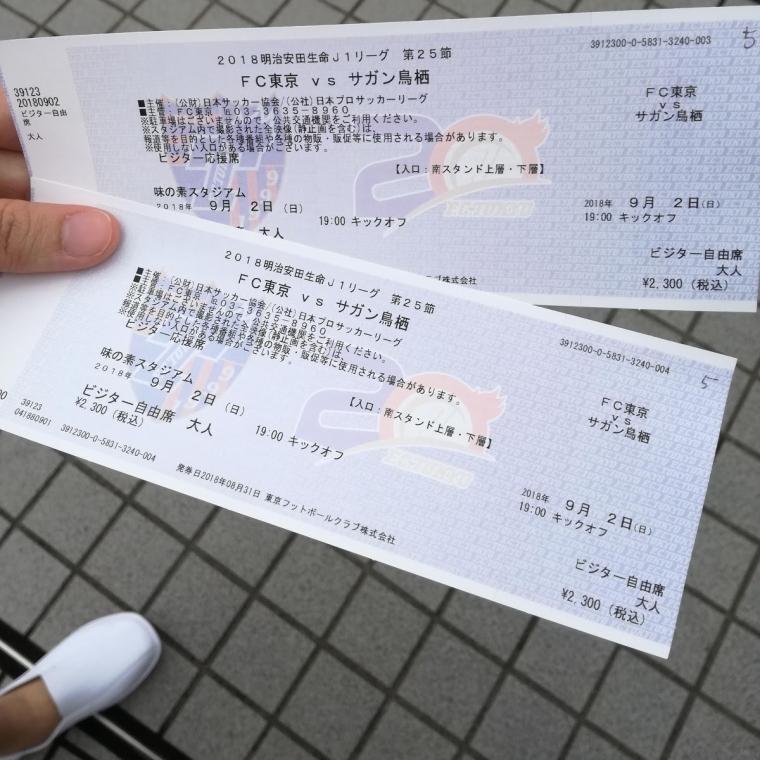 The Journey to Ajinomoto Stadium

I was a bit worried because there seem to be so many train exchanges and it was more than an hour’s ride away. But once we reach one of the outer ring of Tokyo station, J noticed a pair of girls in F.C. Tokyo football jersey. So we decided to “stalked” them throughout the different train exchanges (all the way with me doubting and looking at my travel app!).

True enough, the moment we reach the stadium, mind you we were 2 hours before game time, you can see the crowd of fans and supporters getting off at Tobitakyū Station (飛田給駅). Some of them changed into their jerseys (secret identity revealed!) once they reach the station. I’ve never seen anything like this before! 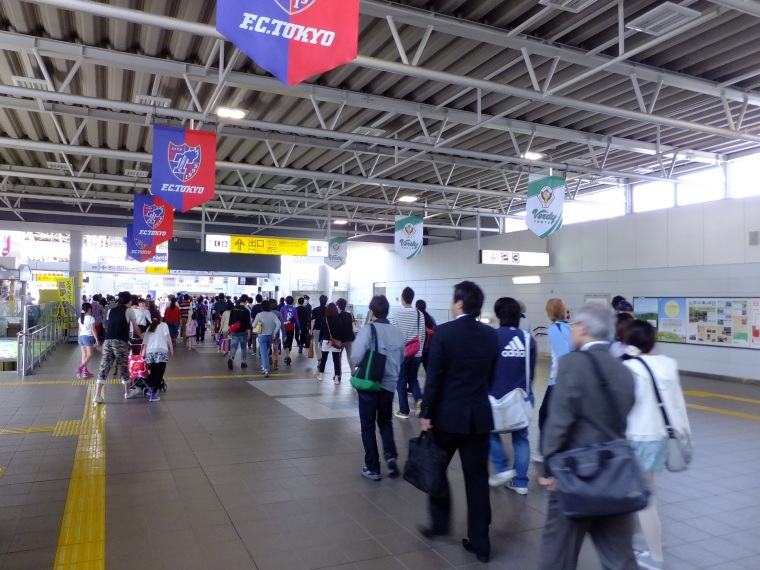 When we hit the street to walk towards the stadium (about 640 meters), the whole town was lined up with posters of the local club F.C. Tokyo, and some stores were selling merchandises for the match. Working adults, young kids, teens, the elderly, baby and toddlers in pram, were all walking towards the stadium. It was as if the town had liven up for this event! It really was an amazing experience.

Everybody’s walking towards Ajinomoto Stadium! FC Tokyo’s posters were hung on the lamp posts all the way leading up to the stadium

And… We are here!

Look at the gloomy sky! Luckily it didn’t rain!

Japanese football is a different ballgame. Remember the 2010 FIFA World Cup in South Africa, where there’s all the Vuvuzela that made your eardrum pop? Well, its a little more melodious here, but still, it was a full-on 90-minute soundtrack! The “cheerleaders” brought their drums and flags, and they were singing all the way!

The game unfortunately not as exciting as the drum rolls and myriad of creative cheer taglines and songs the supporters from both sides came up with. Torres was not really shining, maybe due to his new environment and team mates?

Here’s some highlights from J League’s YouTube, its definitely easier to watch here up close than when we watched live, though atmosphere is no match on tv!

From TV news later at night.

I’m not sure if its the same elsewhere, but gigantic TV screens weren’t showing close up shots. It was showing the home team F.C. Tokyo’s members and Ajinomoto’s adverts – pre, during breaks, and post game, and how Ajinomoto is good for you (with sportsmen as their ambassadors!). The stadium also introduced and showed F.C. Tokyo’s members, but not Sagan Tosu members, I guess its because they’re the visiting team.

How’s a live football match like in your country? Or any matches elsewhere that you’ve been in? Let us know in the comments section! We’d love to hear from you.

Another day, another year. In the early teens, I was very excited in making new year resolutions. I was determined and resolved to fulfill my hopes and dreams with the action of putting in place resolutions, and every year, there were 10 resolutions made. (more…)
Maybe because it is the year end, maybe because it is the presents, or maybe because it is the long holidays. Whatever the reason may be, we can all agree that Christmas has the best... END_OF_DOCUMENT_TOKEN_TO_BE_REPLACED
SCHOOL IS OUT! The holidays are finally here! For children, that is probably THE most exciting to look forward to after a year of school, tuition classes and examinations. BUT for parents, this might actually... END_OF_DOCUMENT_TOKEN_TO_BE_REPLACED